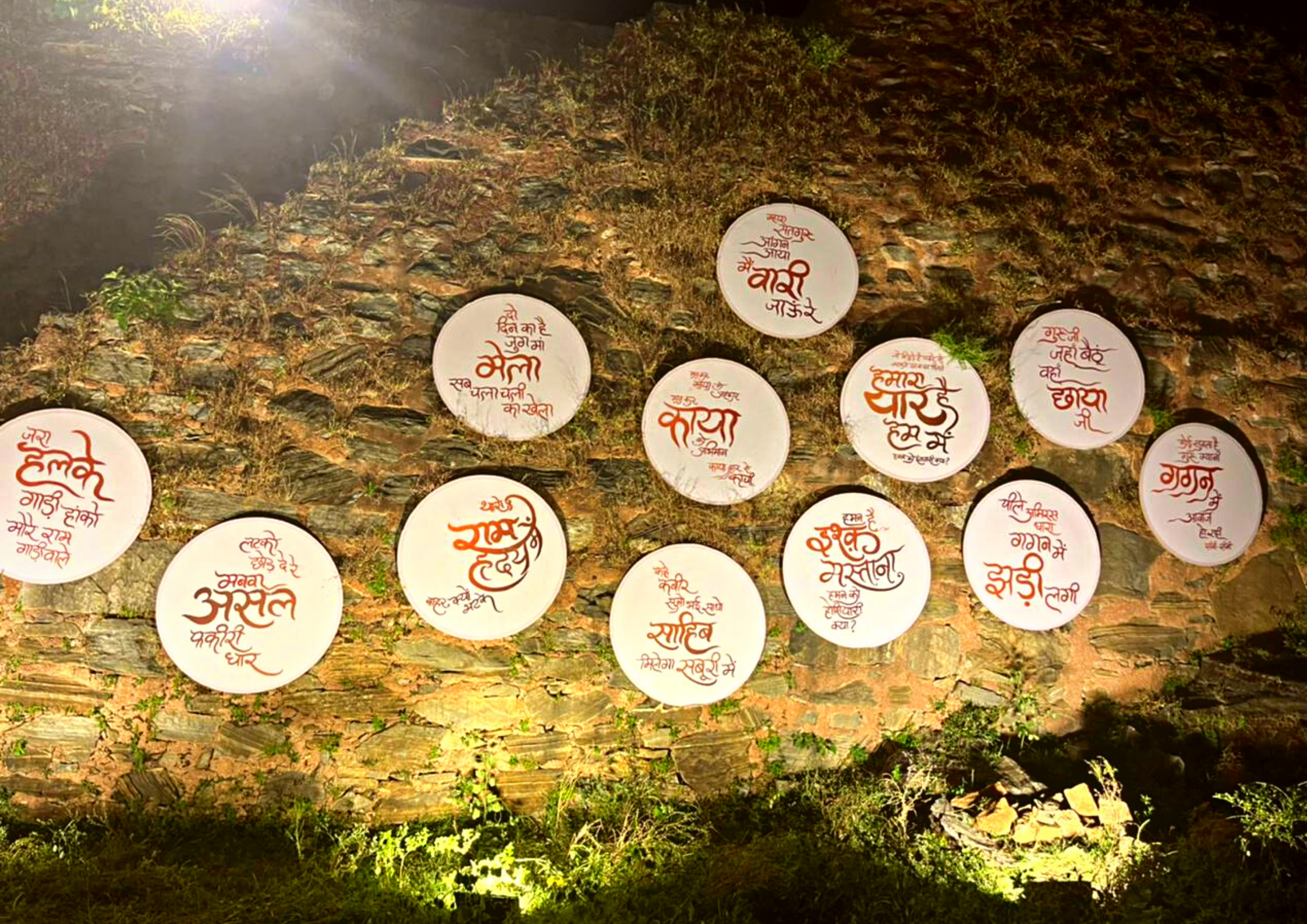 Rajasthan Kabir Yatra: Is It All About Dissolving Boundaries?

In A Candid With Vernita Verma and Sohini

Sohini: Where and why were you away from the office for 10 days in October, much before your birthday?

Vernita:  Well, I wanted to take a break from my busy schedule but I knew that I didn’t want to go on a vacay to some tourist destination. Basically, I wanted to feel like myself again. And when Gopal, my dear friend and the founder of Rajasthan Kabir Yatra told me that the Yatra is happening this year after a long pause of two years, I knew I had to go. Hence, I and Joy stocked up on snacks, packed our bags and headed towards Udaipur.

Sohini: I can see a spark in your eyes while mentioning the yatra. Can you share your experience?

Vernita: Honestly, it’s true. I can’t contain my happiness while I recall the memories. It was six days full of sheer bliss and happiness. Although it is not possible for me to summarise my experience in a few words, I’ll try to be as crisp as possible (laughs).

So, the inauguratory day was Gandhi Jayanti and the destination was the magnificent Fatehsagar Lake. Just when we were approaching the venue we saw a group of people jamming and singing Kabir bhajans, we knew we are at the right place!  Can you believe, a group of complete strangers bonded so well? Only music can do this. The opening day performances by Kaluram Bamaniya Ji, Muralala Ji, Neeraj Arya’s Kabir Cafe, Vedant and Himanshu were also there, Baaul geeti was absolutely mesmerizing. The performances had to be amazing, see the line-up of the artists, but the thing that stood out the most for me was their love for the yatra. I mean, Himanshu Bajpayee Ji just landed a few hours before his performance. What an electrifying performance despite him being tired. I would say, Day One acted like appetizers for the yatris. They wanted to listen to the artists endlessly but the time crunch was real. I remember Neeraj cheekily mentioning the same thing for his closing act. 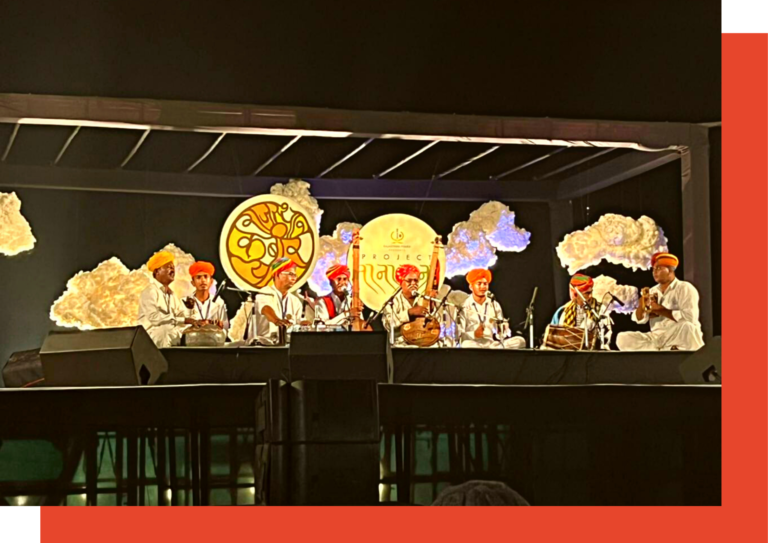 From Day Two the yatra began in a real sense. We travelled to this small village called Kotda in the Udaipur district in Rajasthan. Such a lush, green village with absolutely fresh air, a rare thing where I live (laughs). It was a myth buster for me because whenever we imagine Rajasthan, it’s always a desert full of sand dunes, arid weather and scorching sun rays. But places like these present an entirely refreshing image of Rajasthan. If not for the yatra, I don’t think I would have come to know about these locations.

The highlight of the third day at Phalasia village was the stage. Gagan Mandal is what Darshan (the amazing art designer of RKY) named it. I wouldn’t hesitate to say that it was my favourite stage design for this yatra! Hands down! Darshan knows how to create magic with limited resources. There was not a single dull moment in the entire performance with an audience of 3-4k witnessing it all.

Kumbhalgarh Fort was the location for the fourth day, followed by Salumbar for the fifth day. The venues were jam-packed with yatris. You know what, I would say that the untimely rain brought out the best in everything and everyone. Especially, the team of volunteers were an absolute bliss to watch. I was amazed at how they managed everything with constant smiles on their faces. From finding a new venue to accompanying the yatris safely there to the successful completion of the event of the day, a big shout out to them!

Day Six, obviously approached quite fast. None of us wanted the yatra to end but was it really the end, is what I think. I guess I have been going on and on…(laughs)

Sohini: Unlike last time when you went as an Artist Manager, this time you were a yatri. How was your experience different?

Vernita: See, one really beautiful thing about the yatra is that the line between the artist and the yatris gets blurred. Everyone is travelling together, jamming and discussing Kabir. Taking part in the yatra as an artist manager before, made me realise that the artists do have an advantage in the yatra and I wasn’t ready to be a yatri yatri, at least this time. Keeping in mind the post-COVID scenario, I thought to go a little extra! Even so much as I wanted to enjoy the yatra with my fellow yatris on the bus, I opted for an RV instead.

All that was quite fun, but this time, I wanted to enjoy the yatra from a different perspective. I wanted to go in as a yatri and see for myself how it feels like to just close my eyes and feel the music travelling through my veins. For me, this is a different kind of experience and having worked as an artist manager makes me acknowledge the hard work of the management team even more.

Sohini: Oh yes, I saw the update on your Instagram Profile. RV ha? How did you tackle the judgement around?

Vernita:  Hahaha (Laughs). Even when I was discussing this with Joy, I was quite sceptical about the entire idea of not going for a yatra but just the performance of the artists. He was the one who convinced me by saying that it isn’t like I haven’t witnessed the other aspect of the yatra. If we want to enjoy the yatra, we must do it our way, just like Kabir is for everyone.

You won’t believe it, each and every yatri who saw us travelling in the RV passed flying comments. I remember Gopal bringing in the philosophy of the purpose of the yatra. What is a yatra without the yaatna (hardships)? I did that and loved it, but now I need my space and basic stuff. Maybe it’s the age 😉

Some of the artists in the yatra were also good friends, so they just hopped along with us. They had a peaceful nap and we had some amazing discussions (laughs). At the beginning of the yatra, people were critical about us travelling in an RV and by the end, they were all jealous (laughs). The comments transformed from “Oh, look they are travelling in an RV” to “Oh, your decision was very practical of opting for an RV. We’ll do the same next time.”

Sohini: As far as I know you, I am quite certain that there must have been an idiosyncratic angle to the entire yatra. Am I right?

Vernita:  Each day, after every performance Joy and me, used to retrospect and the one common thought we both had was that we could feel the music not just listen to it. Call it the talent of the artist or the powerful verse of Kabir, or both. I would say, the fifth day of the yatra at Salumbar was a turning point for me. That day after the performance concluded at around 4 AM in the morning, I didn’t know how to describe the events on the stage.

The performances were happening as planned, there were jugalbandis and impromptu artists’ collaborations on stage. As the night was closing in, the yatris were tired and they were falling asleep at their places themselves. Justified, as they were all tired. Then suddenly, everyone was jolted out of their slumber by the compelling voice of two artists. As soon as Bindhumalini and Shruti started their performance, there a kind of emotion was felt. See, I’m getting goosebumps as I recall it. There was just something ethereal about these two women, singing in unison and melting into one powerful voice. There was no sense of competition, no hurry, but a sense of calmness. My soul felt awakened from within. I’m not joking when I say that it wasn’t just me, but almost all my fellow yatris started crying.

This time, I also witnessed a good mix of male-to-female artists ratio. Sumitra Jaitaran Ji was one of many such artists. There was an entire recital dedicated to Jana Bai. Seeing female artists, belonging to rural areas performing on a stage like this gets good exposure. Otherwise, the audience is also mostly limited.

Although each and every one of us has a right to this opportunity, many of us don’t get the chance to exercise it. Be it due to a lack of familial support, marital responsibilities, kids etc. and to get past all the hurdles shows not only their dedication but also the people who must have stood with her. I would like to say that all music festivals should have a similar ratio.

Sohini: What is Kabir for you?

Vernita: Kabir, for me isn’t just any singular identity rather it is an ideology. It is like a personal feeling I would say. More like a 3 AM friend, who’ll just be there with you. Sometimes you get answers, sometimes questions remain unanswered. Even the narratives around the birth, religion and life of Kabir are debatable but I feel that is what gives Kabir’s verses the essence. I guess that is why his words are still so relevant even today, especially in political turmoil. You know one of my fellow yatris who was an RJ asked me to summarise the yatra in a single word. I couldn’t because there isn’t a single word. There is no single way I can remember Kabir or celebrate Kabir. Probably that’s why I do keep taking part in the yatra, to figure out who or what Kabir is.

If the answer would have been easy, there wouldn’t have been such meaningful collaborations like Taana – Baana, a pilot project initiated by the Rajasthan Police with a vision of promoting and nurturing a harmonious atmosphere between different castes/communities to ensure peaceful coexistence in society and Lokayan.

Who could imagine the state Police collaborating and participating in a cultural music festival? Since Kabir is for everyone, I thought it was such a nice and innovative way to reach out to the masses and eliminate the localities’ fear regarding the police. “Zara halke gaadi haako mere raam..” was such an innovative way to bring out the road safety measures to the public by the artists.

Sohini: How will you prepare me for the yatra, now that I am all pepped up?

All I would want to say is that you, being today’s youth, should participate in the yatra at least once in your life. You are bound to get a new perspective on life. One thing I was so happy to witness was that a lot of young girls and women participated in the yatra. A sense of independence is reflected in their attitude and I wish that this trend increases.